We are sad to report the deat 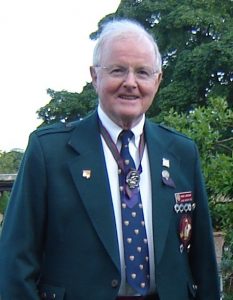 Ron will be remembered by members of the Clan Lindsay Society both here in Scotland and in the USA for the cheerful personality which was the outermost expression of his deep interest in all Lindsay matters. Many will have met him here in Scotland, and may perhaps remember his charm and intellectual grasp particularly from the 2009 Gathering.

Ron is also known to many as the founder, architect and shepherd of the Lindsay International Surname DNA Project, which dates back nearly 20 years. This exciting project has helped trace links between those of the surname Lindsay (however spelt) in many parts of the world, and has considerably increased our knowledge of the
wider Lindsay family. As part of this work he built the international Lindsay surname
web site – http://www.clanlindsay.com/news.htm

Ron was born at home in Mt. Olive, North Carolina, the sixth of eight children and first of twin sons of Addest Lutrell and Mary Margie Baggett Lindsay. He graduated from North Carolina State University, with a science degree, which he put to work during a distinguished 30-year career with IBM in Raleigh, North Carolina.

Friendly and outgoing, Ron was a natural leader, taking an active role in Clan Lindsay USA (president from 1990-1994) and the Osher Lifelong Learning Institute at Santa Clara University in Santa Clara, California. He loved history, philosophy, traveling, and time spent with friends.

Ron’s lifelong passion was chronicling his family history and genealogy. He had recently published a beautiful 881-page Lindsay family genealogy book last year (The Lindsays of Goshen), a legacy that will be treasured for generations to come.

Many of our Scottish members had the pleasure of meeting Ron and his wife Carol when they made an extended tour of Lindsay people and places in Scotland during the summer of 2009. Courteous and kindly, they were excellent ambassadors for the clan, the surname and for the Lindsay DNA Project. The science that underlies the DNA Project is not at first easy to grasp, but Ron explained the details with patience and clarity to all who showed an interest. 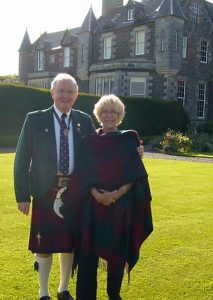 Ron and Carol travelled from Fife, through Edinburgh and Glasgow to the west coast, meeting and staying with members of the Clan Lindsay Society on their way. They were delightful guests, genuinely fascinated by all aspects of Scotland and by the activities and interests of those they met. I remember him identifying and pointing out Lindsay heraldry in the glasswork in the Great Hall at Stirling Castle within minutes of entering the room.

Ron’s first wife, Norma Jean, died many years before him. He is survived by Carol; his children Donna Jean and Ron, by his step-children Thom and Lisa, and by 10 grandchildren and one great-grandchild. He is also survived by his twin Donald, and two other brothers. Our sympathy goes to them all. Our Chairman has written a personal letter of condolence to Carol.

Pragmatic as ever, Ron effected a transfer of leadership of the international Lindsay surname project to Joe Lindsey last summer. Joe is taking the project forward with understanding and enthusiasm. Its success will be Ron’s great legacy to the Lindsay family worldwide.