The publication, Scotland and the Flemish People, traces the influence of families of Flemish descent (including the Lindsays) who settled in Scotland in the late mediaeval period.  Superbly produced, the book is published by John Donald, an imprint of Birlinn Ltd, and costs £20.  It can be ordered through all good booksellers (ISBN 978 1 910900 27 7) or through the publisher at www.Birlinn.co.uk   The book was launched in Edinburgh at a splendid event to celebrate Flanders Day on 27th June 2019, hosted by Mr Nic Van Der Marliere (General Representative of the Government of Flanders to the UK) and Mr Ben De Smit, Economic and Commercial Counsellor.  The authors of the book gave a brief presentation to those present and, following a question and answer session, kindly agreed to sign copies of the publication.  The reception was attended by representatives from a number of Clan Societies with Flemish antecedents, including Diarmid Lindsay (Secretary), Nigel Lindsay (Treasurer) and Mary Rose Lindsay on behalf of The Clan Lindsay Society. 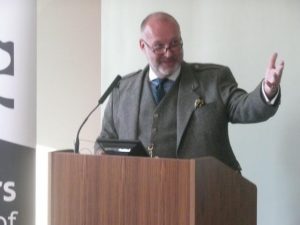 Mr Nic Van der Marliere, General Representative of the Government of Flanders to the UK, welcoming the publication of Scotland and the Flemish People.

Scotland and the Flemish People has been edited by Dr Alexander Fleming (an economist) and Roger Mason (who recently retired as professor of Scottish History at St Andrews University).  The book is delightful and easy to read, and  contains much fascinating information on how trade, art, architecture, culture and sport in Scotland were influenced by Flanders, as well as fascinating information about the Lindsays, Murrays, Sutherlands, and other Scottish families who trace themselves back to Flemish roots. 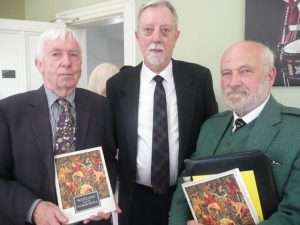 Nigel Lindsay (left) and Diarmid Lindsay (right) representing The Clan Lindsay Society at the launch of the publication Scotland and the Flemish People, with (centre) Alexander Fleming, co-author of the book.

Publication of “Scotland and the Flemish People”

The book “Scotland and the Flemish People”, edited by Alexander Fleming and Roger Mason, was published on 7 March 2019 (198 pages).

This book is the culmination of the major research project on “Scotland and the Flemish People” hosted by the Institute of Scottish Historical Research at the University of St Andrews. The project was nominally a 3-year project which concluded with the conference held in St Andrews in 2016.

The book is wonderfully illustrated with maps, diagrams and pictures and provides a comprehensive overview of the relationships between Scotland, Flanders and the Flemish people from the middle ages to the present.  The book examines the nature of Flemish settlement in Scotland, the development of economic, diplomatic and cultural links between Scotland and Flanders and the lasting impact of the Flemish people on Scottish society and culture.

Although Gilbert of Ghent and the Lindsay family do not feature strongly in the text (see page 140), the book, never-the-less, is engrossing and is highly recommended to anyone interested in the culture of Scotland.  The cost is £20 (softback) but also available on-line from Amazon at a reduced price.

Participation in the “Scotland and the Flemish People” Project

The Clan Lindsay Society has taken an active part in the development of the study.  A series of Blogs were published on the Project Website including a contribution from our Society.  This was entitled “The Lightsome Lindsays: Roots and Branches” written by Diarmid Lindsay and can be viewed via the following link  Lindsay Blog

The diagram of the family tree can be enlarged by clicking on the image.

Background Notes for the 2016 Conference

The Conference on Scotland and the Flemish People took place at the University of St Andrews on 16 -17 June 2016.  Unfortunately Lord Lyon was unable to be present to make his presentation but two Members of The Clan Lindsay Society were able to attend the two day Conference and contribute to the work sessions.  The following text details the aims of the conference.

“This major inter-disciplinary conference will explore the important relationship between Scotland and Flanders in the medieval and early modern periods and the influence of Flemish People and Flemish culture on Scotland through the centuries. It represents the culmination of an innovative three-year project, based at the Institute of Scottish Historical Research at the University of St Andrews, which has incorporated the research of leading scholars, local and family historians, as well as new doctoral research by students based in St Andrews.

The conference programme is taking shape and will be posted on our website in due course. We are delighted to announce that keynote lectures will be given by Dr. David Ditchburn, Trinity College Dublin, Professor Jan Dumolyn, University of Ghent, Professor Richard Oram, University of Stirling and Dr. Joseph Morrow QC, The Lord Lyon.”

Introduction to the “Scotland and the Flemish People” Project

The Scottish Local History Forum based in Edinburgh are undertaking a project with the Institute of Scottish Historical Research of St Andrews University, to show the contribution to Scotland made by members of the families of Flemish descent.

Are the Lindsays Norman as originally thought, or are we descended from the Flemish Lords of Ghent and Alost?

We hope that the Project brings together the considerable contributions of Lindsays to Scotland and provides great interest and value to our members and readers.

Please click on the links to read the newsletters and related documents. Contact details are enclosed should you want to get involved.