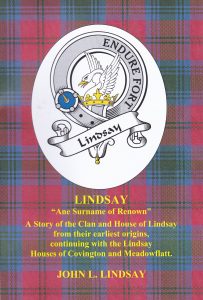 The origins of the Lindsays have been unclear, confused between Normandy and Flanders and even Norway. This book looks afresh with updated new evidence and traces their descent across 13 centuries until continuing down one of their many family branches to today.

The story takes us from clarifying the source to the earliest Continental noble families of Kings, Counts and gallant Knights as they are transported by the sweep of history into England with Duke William and the Conquest. We find the source of the Lindsay name as they further progress with Prince David into Scotland.

Follow down the centuries of Scottish history as they play their part at the heart of the nation and acquire lands and build castles at Lufness, Crawford and Edzell. Three Earldoms are awarded including that of their Chief as Earls of Crawford. The Clan Lindsay is born and its branches grow and later spread around the World.

Then by descent from a Great Chamberlain we follow the Lindsay House of Covington down turbulent years of good Barons and bad, terrorising the Borders in the sixteenth century. In time their descendants settle peacefully to farm at Meadowflatt and Covington Mains, the fertile lands of Clydesdale until the 20th century scatters them again. Finally the author, John, returns to his roots to trace and write the whole story.

Even John’s ultimate junior house of Meadowflatt emerges with historic connections including by marriages to the Prentices bringing links to the Covenanters and a visit by Robert Burns, then three times to the Patersons of Lochlyock, founders of the Clydesdale Horse and the disastrous Darien scheme.

All Lindsays today can be brought together by the Clan Lindsay Society of which the Author is a Vice President and former Chairman.

Few are lucky enough to be able to trace their ancestors over 40 generations living though so much turbulent history. A must read for Lindsays everywhere and for those interested in the art of family history.